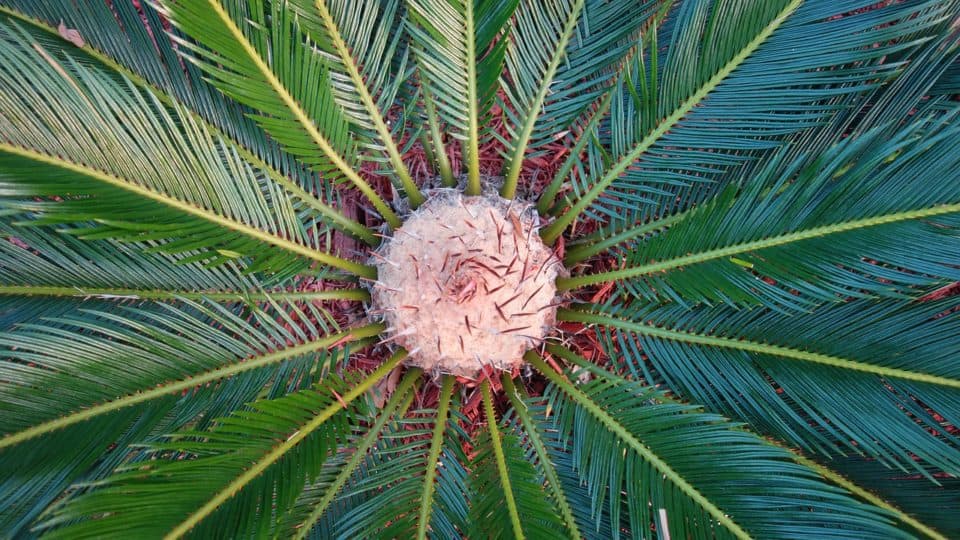 Sago palm, botanically known as Cycas revoluta, isn’t actually related to the palm family. Instead, it is a cycad and there are around 40 species of the sago palm.

They have been around since prehistoric times and give a tropical vibe wherever they are placed.

Although they mimic the palm trees a lot in their appearance they are quite different from them.

The stout trunk and the crown of bright green fronds make them quite attractive for landscaping.

Naturally, they are found in tropical areas and like to grow in places with a warm temperature.

Why do Sago Palm Leaves Curl? These slow-growing plants produce a new set of leaves every year. These new leaves are quite vulnerable when they first come out.

But once they mature, they become hard and practically resistant to most of the challenges their environment has to offer.

Naturally, the new leaflets that emerge from the main stem are curled and slowly straighten up to form proper fronds.

If Improper unrolling or unnatural curls occur, then it indicates some sort of underlying disorder. The unnatural curls can be due to many reasons. The most common include:

Your sago palm may start to become sick because of incorrect watering.

They only require a modest amount of water but they shouldn’t be left to dry up completely.

If they are left without proper hydration, the bright shiny leaves can lose their luster and can curl in unnatural ways.

The most common nutrient deficiency that your sago palm can face is manganese deficiency.

Sometimes the soil may naturally be deficient in manganese or the sago palm may lack proper fertilization to cause such problems.

Soils with pH at the extreme ends can make it difficult to retain manganese as well. This makes the sago palm unable to extract the necessary nutrients from the soil.

Even though sago palms are quite resistant to disease, they can often be infected by different fungal pathogens.

The most common pathogen causing root rot problem is the Phytophthora. It can cause damage to any part of the plant.

The first symptoms of the disease include yellowing of leaves which then gradually affect the leaves and cause them to curl.

Why do Sago Palm Become Yellow?

Sago palms can develop yellow leaves due to many different problems but the most common conditions are described below:

The most common pests which disturb sago palms include the Asian scale.

These pests are found on the undersurfaces of the frond where they penetrate the vascular system of the leaves and suck the sap.

This causes a deficiency of nutrients and causes the leaves to become yellow.

Giving too much fertilizer to your sago palm can cause the leaves to droop and develop a yellowish tinge.

Over uptake of minerals can burn the plant and its leaves. Due to this the edges of the leaf become discolored and turn brown.

The damage gradually involves the whole frond and can result in the shedding of the leaves.

3) Placing them in Cold Temperatures

Cold weather hampers your sago palms from uptaking nutrients from the soil.

The freezing temperature can cause yellowing in this way and the only remedy is to make the plants survive the harsh weather.

4) Moving the Plant to Another Place

Sago palm doesn’t like to be disturbed frequently. If you move your palms from one place to another quite often then your plants may go into a state of shock.

The repetitive damage to the roots causes the palm to stop its growth. It takes time to adapt to the new setting and this reason may cause the existing leaves to become yellow.

The leaves may also be bruised from the physical ordeal and may also fade in color due to the damage.

You may also like: how do you save an overwatered palm tree

You should look out for the following diseases and problems that can severely damage your sago palm:

Sooty mold doesn’t directly grow on the palm, rather it thrives on the sweet secretions left by the sap-sucking insects such as aphids, mealybugs, and scales.

The mold covers all the leaves and gives a powdery sooty appearance to them.

This blocks the penetration of sunlight to the leaves and reduces the ability of the plant to make food.

This can easily result in the death of your sago palm so it’s best to control the disease even when minor signs start to appear. As already mentioned above, the Phytophthora fungi is the most common pathogen to infect the Sago palm.

This brown fungus attacks the bark when ample moisture is present. It most commonly attacks when the temperature is cool and the humidity is raised higher than normal.

As the fungus takes hold of the plant, it causes the bark to crack and ooze away the precious sap. The bark eventually turns brown and completely comes off the plant.

The damage causes stunting of growth and dropping of the leaves. If not controlled early, the palm can lose its beauty and health very quickly.

Another fungus called Ganoderma zonatum is commonly found to degrade the trunks of Sago palms.

The fungus spreads by spores and can occur out of the blue without any warning signs. The infected palm shows poor growth and looks wilted in appearance.

Once the palm is infected, it becomes impossible to treat it.

The only solution to the problem is to uproot the plant as soon as possible to prevent the infection from spreading to other plants in the vicinity.

No other sago palms should be planted in the soil where previous plants faced this kind of problem.

How to Save a Dying Sago Palm

Take care of the respective steps to save your dying Sago palm:

Watering in moderation helps your Sago palm to stay healthy. When watering, soak the soil taking care not to overdo it.

Water it the next time once the soil has completely dried up. Normally, watering your Sago palm once every week will suffice. Also, take care to never water the foliage of the palm.

Making the leaves wet will expose the plants to fungal attacks and also makes the fronds turn yellow. So extra care should be taken in this regard.

2) Keeping your Palm Away from Pests

If your Sago palm is affected by pests, it’s best to use organic pesticides for removing them.

Neem oil works wonders in these kinds of situations and helps keep the nasty bugs from coming back again. Leaves affected by scales should be pruned.

Extensively damaged fronds should be completely clipped. A homemade insecticidal soap spray can also be used to shun away the aphids feeding on the sap.

Only use chemical pesticides as a last resort when the problems get too much out of hand.

Sago palms aren’t that picky when it comes to nutrition. However depriving them of certain nutrients, like manganese, etc, can seriously damage the growth of the plant.

For preventing such a mishap, plan evenly spaced meals throughout the growing season of the palm. The essential growth occurs from April to mid-September.

The fertilizer of choice for Sago palms is slow-release palm fertilizer. Ordinary composts don’t benefit Sago palms that much.

If your palm has manganese deficiency, then it can be taken care of by application of manganese sulfate.

4) Planting your Palm in Favorable Areas

Sago palms do well when they are planted in well-drained and aerated soils. They don’t like overcrowding.

Proper spacing between adjacent plants should be maintained to give the Sago palm enough room to grow.

A location with adequate sunlight takes care of most of your problems. Also, take care to prevent mulching around the base of the plant.

This causes accumulation of moisture and may invite unnecessary fungal diseases.

If your plant unluckily gets infected by root rot, then it is best to transplant it somewhere else.

Even though mature palms don’t cope well with transplanting, it is worth it to save your plant early on.

Final Thoughts: How to Fix your Sago Palm Problems Sago palms are majestic plants that are a part of every tropical garden you can find.

Even though they are quite hardy, they still require some extra care when it comes to certain diseases.

By reading all the above information, I am sure you will be able to handle all your Sago palm problems with no sweat at all.

How to fix your Kentia palm problems

Can I Put my Kentia Palm Outdoors

Saad is an avid gardener himself and is a great lover of plants, animals, photography, & people. Currently, he is focused on photographing indoor plants & captioning beautiful outdoor sceneries. He writes and rewrites in-depth articles on nature and science.

link to Is a Hydrangea an Annual or a Perennial

Hydrangeas can survive frost and withstand a wide range of temperatures. Some types of hydrangea can withstand temperatures as low as -20 degrees Fahrenheit (-30 degrees Celsius). In contrast,...